Casper Grønn Spiele, Partner at People in Sport, talks TransferRoom through the calculations the Danish agency uses to ensure each transfer pays off for its clients and clubs.

Each player has an individual career path and right in the middle of the venn diagram is the sweet spot of the right club. Depending on their age, their circumstances, you try to get as close to that sweet spot as possible at all times.

People in Sport has over 50 players on its books, with the likes of senior Danish internationals Thomas Delaney (Sevilla) and Jonas Wind (FC Copenhagen) joined by Under-21 stars Mads Bech Sorensen (Brentford) and Victor Jensen (Ajax).

It was a busy summer for the agency, headlined by Delaney making the move from Borussia Dortmund to the LaLiga side, but it was the transfer of another Dane, Marcus Ingvartsen, from Union Berlin to FSV Mainz 05 in the Bundesliga that exemplified the agency’s way of working.

Ingvartsen spent most of the 2020-21 season as an attacking midfielder for Union, but joined Mainz on loan with an option to make it permanent next summer after promises from manager Bo Svensson to play the 25-year-old in his preferred striker position.

Ingvartsen said at the time of his signing: “I had really great discussions with Mainz and the position in which Mainz wants to use me suits me. I'm a trained striker, and that's the role I feel most comfortable in.”

Grønn Spiele tells TransferRoom: “It was not the biggest deal for us, because it was a loan with an option, but in terms of finding the right club at the right time for our client, it was very important. It hit the sweet spot.”

That sweet spot is the centre point of People In Sport’s venn diagram (pictured below) that it rolls out to its clients ahead of each potential move.

Explaining their model, Grønn Spiele says: “When we talk to players about their careers, we always focus on the venn diagram: there is the economical way of thinking, the sporting ambition and then the private.

“Each player has an individual career path and right in the middle of the venn diagram is the sweet spot of the right club. Depending on their age, their circumstances, you try to get as close to that sweet spot as possible at all times.

“It may be a bigger perspective on the sports part for a young player, the private part for a player with a young family and the economics part for an older player. But, of course, every player is different, every conversation is different.” 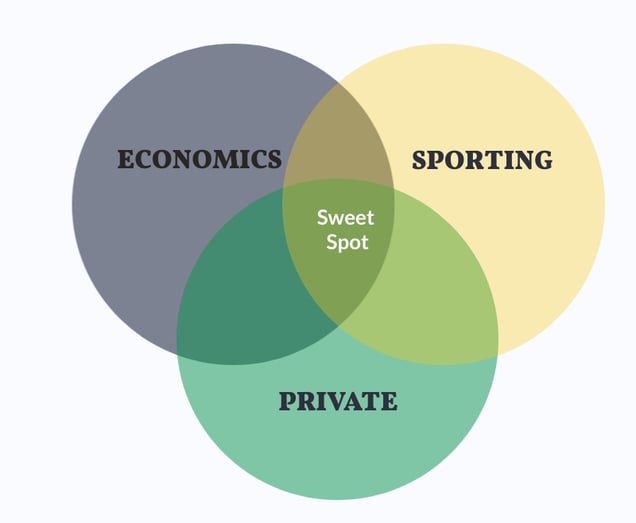 He continues: “A lot of it goes hand in hand: if you are playing in a top five league, then you will earn your money. But then there's added pressure, so make sure you have everything under control in your private life too.

“Working at this level you don’t have so much time to adapt. If you are 23 years of age coming into the top five leagues [in Europe] they expect you to play tomorrow, so we have a strong duty of care. We work in a very transparent way with our players and make sure we are very close to them to make sure that when they leave Denmark or if it’s from Germany to Italy or Italy to England, they have as much information as possible to help them settle.”

People in Sport is among a select group of Trusted Agents on TransferRoom, and the firm is using the platform to maximise career opportunities for its players, always with the goal of moving them to clubs in Europe’s top five leagues.

“To run a good business and be a successful agency, the players need to play abroad. We have a really interesting market in Scandinavia and especially in Denmark because out of the Scandi countries, Denmark is the country with the highest quality, with all respect to Sweden and Norway,” continues Grønn Spiele.

“When we are talking to players, let’s say a 21-year-old, who is living alone, so maybe the private part is not so important, and at that age maybe the economic part is not most important either, you’re really searching for a club where the sporting project is the most important.

“We always try to go for the top five leagues in Europe and it doesn't matter if, for example, it's Salernitana in Serie A or Lazio. The most important thing is to find the right club in the top five, and for that reason we can use TransferRoom as a tool.

“We always used to collect lots of information from different resources, like WhatsApp, email, or regular phone calls, but now we can use the platform to see that there are 25 clubs in the top five leagues looking for a centre back. With that transparency we are giving players a lot of insight. They know we have direct access to all these clubs. The players have to see us as Trusted Agents also.”

To learn more about the benefits of becoming a Trusted Agent, click here: https://www.transferroom.com/solutions-agent.